He graduated from the Faculty of Economics of the Chisinau Agricultural Institute in 1985. In 1991, he defended his dissertation for the degree of doctor of economic sciences on land tax issues at the All-Union Scientific Research Institute of Agricultural Economics (Moscow). Since 1995, he has been the director of the audit firm “Concept” S.R.L. (Ltd.), and since 1996 – the editor-in-chief of “Accounting and Tax Advice” magazine. Author of more than 250 publications on taxation and economics.

Has authored and co-authored the following books: “Secrets of Tax Planning: Legal Ways of Minimizing the Moldovan Tax” (1993), “The Price of Land Under the Transition to a Market Mechanism of Economic Management” (1993), “Moldovan Tax Code (commentaries)” (1998), “Commentary to Section III of the Tax Code, Value-Added Tax” (1999), “Secrets of Tax Cuisine” (2008).

She graduated from the Faculty of Managerial Accounting and Computer Science of the Moldovan Academy of Economics specializing in Accounting, Audit and Analysis of Industry Economic Activity, in 1994. Between 1990–1994, she worked as an accountant and chief accountant in a number of commercial firms. Since 1995, she has been employed with “Concept” S.R.L. (Ltd.) She has been an auditor since 1995. During 2004–2005, she completed a training program at the Academy of National Economy under the Government of the Russian Federation (Moscow) and was awarded the MBA qualification (“Master of Business Administration”). She took a course in “Modern Management: Delegated Responsibility - Concept of Governance in Social Market Economy” at the AFW Business Academy (Bad Harzburg, Germany). She attended the seminar on “Research in Management” under DBA programme (“Doctor of Business Administration”) at the SBS Business School (Zurich, Switzerland). She is the author of more than 35 copyrighted materials on accounting, audit and taxation.

She graduated from the Accounting Faculty of the Moldovan Academy of Economics, specializing in Accounting and Audit, in 1998. Between 1998–2004, she worked as an accountant, chief accountant and chief financial officer in a number of Moldovan and Romanian commercial firms. Since 2004, she has been employed with “Concept” S.R.L. (Ltd.) She became a qualified auditor in 2006. She is a member of the editorial board and author of several publications in “Accounting and Tax Advice” magazine. She attended the training course under “DipIFR Rus” program, and participated in several professional advanced development seminars.

She graduated from the Free International University of Moldova, Law Faculty, specializing in Civil Law. Since 2004, she has been  employed with the “Concept” S.R.L. (Ltd.) audit firm. She is a member of the editorial board of “Accounting and Tax Advice” magazine, for which she has authored a series of articles. 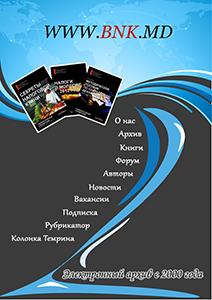